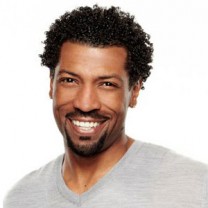 Deon Cole (born January 9, 1972) is an American actor, comedian, and comedy writer. Originally based out of Chicago, he is best known as a member of the writing staff of The Tonight Show with Conan O'Brien (2009–2010) and subsequently Conan (2010–present) and also for being a cast member on the sitcom Angie Tribeca (2016–present). He has appeared frequently in comedic bits for both broadcasts and has, along with the rest of the staff, received two Primetime Emmy nominations. He first got into comedy when a friend bet him $50 that he would not get up on stage one night in Chicago.

Cole has also performed stand up on other programs such as John Oliver's New York Stand-Up Show, Mash Up and Lopez Tonight. Cole created his own production company, Coled Blooded, to produce the sketch comedy show Deon Cole's Black Box. It premiered on June 10, 2013 on TBS but was canceled on October 25, 2013. Currently Cole has a recurring role on the ABC sit-com Black-ish.