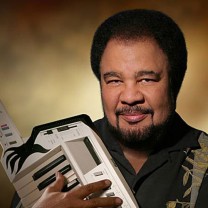 Multi-Grammy Award winning GEORGE DUKE has worked with a Who’s Who of musical greats, including Cannonball Adderly, Anita Baker, Miles Davis, Al Jarreau and Dianne Reeves. One of the foremost keyboard pioneers, George helped usher in the 70’s fusion revolution with his work with Jean Luc Ponty and Frank Zappa.

Through the years, along with his 30 solo projects and busy producing schedule, George has acted as musical director for numerous artists and television specials, including the “Soul Train Music Awards” (nine years) and “NBC’s Sunday Night Show.” He has composed for films such as The Five Heartbeats soundtrack, the title song for the movie Karate Kid III and music for Paramount Pictures Leap Of Faith and Meteor Man. In addition to his many Grammy nominations and awards, Duke was named “R&B Keyboardist Of The Year” by Keyboard Magazine several years in a row and received the coveted Edison Life Time Achievement Award in Rotterdam. He was also nominated for a NAACP Image Award in music.