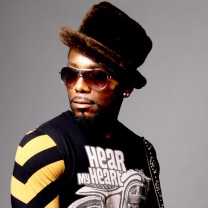 Martin Luther McCOY a guitarist, singer and songwriter, makes his acting debut with the role of Jo-Jo in Across the Universe. Recording under the name Martin Luther, he will release his next album, Serial Thriller, early in 2008. In the meantime, he is releasing Live from Arlene's Grocery this fall exclusively on iTunes.

Luther's most recent album, Rebel Soul Music, was released in September 2004 to much critical acclaim. The Associated Press named it number 4 on its Top Ten Albums of 2004 and People Magazine named it a Critic's Choice, rating the album 3.5 out of 4 stars. He was the first independent artist given the privilege of recording a performance session for MTV Live on MTV.com. He was also named the VH1.com You Oughta Know artist on 2 separate occasions. His music video for the single Daily Bread debuted on the VH1 Soul network and was in their top-10 rotation for four months. Rebel Soul Music sold over 20,000 copies in the US, spurring releases of the album in Europe and Japan.

Luther has performed over 100 shows since the album's release, traveling with his band throughout the US, Europe and Japan. He has toured as a solo artist on the same bill as Jill Scott and The Roots and has also performed for audiences numbering in the thousands as a featured member of the Roots.

Like the legend for whom he was named, Martin Luther was raised on a diet of choir hymns and stringent rules set forth by strict, religious parents. As a youngster, he was forced to take traditional piano lessons so that he could one day play in church. Exposure to the psychedelic sounds of Parliament Funkadelic by his brother set him on the path to finding his own voice as an artist. Continuing to play the keyboard, he added the drums to his musical arsenal and finally mastered his secret weapon -- the guitar.