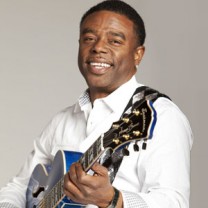 GRAMMY® Award winner Norman Brown is on close intimate terms with his audience. For almost two decades, it has been an engaging, mutually rewarding relationship, with the multitalented guitarist, composer and singer offering tasty sonic tidbits of classic R&B and contemporary jazz and his fans melting into satisfied aural bliss with every succulent, jazz inflected note. It‟s a veritable “love fest” – and Brown keeps the good vibes going on his long- awaited new release, Sending My Love, arriving this June on Peak Records. “I‟m a loving guy -- I hear that a lot. I started reading my emails and the fans were sending me so much love that I wanted to send them love back,” explains the artist, who wrote nine of the ten tunes on this offering. “The CD is about pure love, love in all its many aspects: a personal relationship and a general love for the planet and for people. We should be kind to each other,” he adds.

Brown intensifies the flavors in an already much-beloved recipe of sound, with ten tracks that flow easily from steamy R&B to guitar lashed flights of instrumental fantasy, all the while keeping things right in the pocket. From the first track – the easy breezy, horn-laden smooth jazz single “Come Go With Me” – to the sexy groove of the R&B single “I‟m Pouring My Heart Out” to the gentle acoustic guitar melody of “One Last Goodbye,” Brown shows off the stylistic diversity that has gained him a loyal following. He does so by utilizing some of the tried and true musicians, songwriters, and producers he‟s worked with in the past: longtime collaborator Herman Jackson, bassist Alex Al, drummer Teddy Campbell, rhythm guitarist Jubu, and percussionist Kevin Ricard. He also reached out to R&B production camp Tha Bizness and R&B songwriters Melvin Moore III (who happens to be his godson) and Floyd E. Bentley III from his Kansas City hometown for the hop vocal tunes “I‟m Pouring My Heart Out” and “One Last Goodbye.”

Even his daughter Rochella Brown, a student at the prestigious Berklee College of Music, and her songwriting partners arranged a new version of the Kenny Loggins classic “Celebrate Me Home” (which was co-written by Bob James). Rochella sings with Brown on the beloved gem, which also features a choral contributing from GRAMMY® winning ensemble Sounds Of Blackness. Brown adds that, with a daughter serving in Iraq, he dedicated the song to our troops. “I‟m dedicating that to my second oldest daughter, Kesha, a West Point graduate who is a first lieutenant, fighting in Iraq,” he said. “I think about all the families of these troops and the troops themselves, and „Celebrate Me Home‟ hits it on the head -- we all want to see them come home safely.”

Brown flirts with Latin rhythms on the sexy “Play Time,” and shares a haunting melody on the instrumental “Special Moments,” which Brown says is one of his favorites from the set. Longtime fans will enjoy the showcase of his guitar prowess on the slow groove “Here‟s My Number,” while others will recognize the signature Brown touch on “Coming Back (Return of the Man.)”

Born in Shreveport, Louisiana, and raised in Kansas City, Kansas, Brown first picked up a guitar at the age of 8. Inspired by Jimi Hendrix‟s mind-bending rock sounds, Brown soon discovered his father's favorite artist, Wes Montgomery, and found his stylistic holy grail. After high school, Brown moved to Los Angeles to pursue his musical career, attending the Musicians Institute where he also taught for a time. While playing with his own group in local clubs, and drawing comparisons to George Benson, Brown was discovered and signed to the MoJazz label, a division of Motown. He delivered his 1992 debut, Just Between Us, and followed with the gold- certified After The Storm and 1996's Better Days Ahead.

With critical acclaim and sales behind him, the talented musician made the leap to Warner Bros. and released Celebration, which first teamed him with producer Paul Brown. The 2003 follow-up, Just Chillin', earned Brown much-deserved recognition with a GRAMMY® Award in the best pop instrumental category. That project was followed by his 2005 release West Coast Coolin', where Brown tested out his skills as a vocalist, a move that was welcomed by the urban AC radio market. In addition, his 2005 compilation The Very Best Of Norman Brown was one of the best- selling smooth jazz albums of that year.

Brown made the leap to the Peak Records label in 2007 for his smash CD Stay With Me, which yielded the R&B vocal hit “Stay With Me” and the smooth instrumental favorites “Let‟s Take A Ride” and “Pop‟s Cool Groove.” With the brand new Sending My Love, Brown is building on the musical foundation he laid with Stay With Me, which landed at Number One on the Billboard Contemporary Jazz Albums chart.

In addition to success as a musician and producer, Brown has launched a successful career as a broadcaster. In January of 2007, he brought his engaging personality to Broadcast Architecture‟s Smooth Jazz Network as an on-air personality, hosting this own weekend radio show. But performing is his first love. For yet another year, Brown will share his onstage fire with the launch of the 2010 version of the annual Norman Brown's Summer Storm tour. With a string of dates stretching from May to September, Brown will share the magic of Sending My Love as well as his many beloved hits.

“ On this album I wanted to really feature what people liked about me -- great guitar playing, very lyrical melodies,” Brown explains of his intentions for Sending My Love. “I wanted to make the songs easily digestible, not too complicated, with easy grooves that you don‟t have to think too much about. You can put this record on, have a glass of wine with someone you love, or just socialize with friends. It‟s a feel-good thing, and I want to uplift people‟s spirits and make them feel good.”