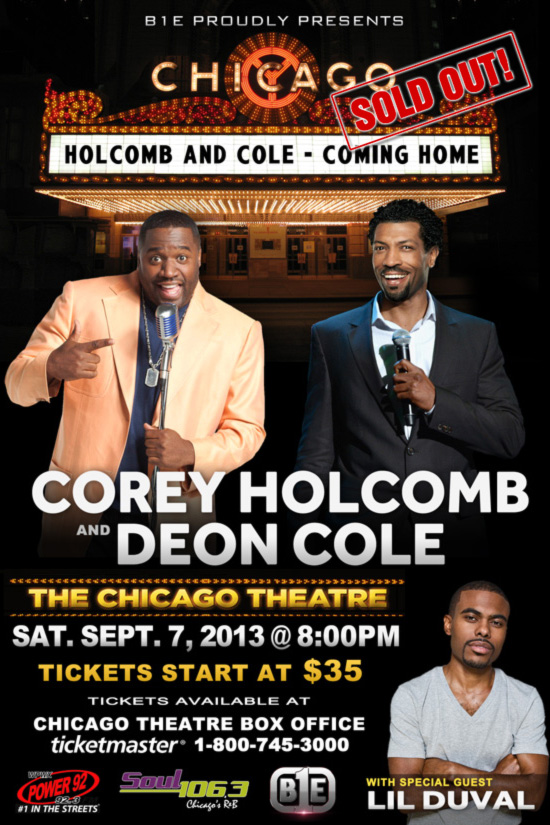 Corey Holcomb performed his first open mic in 1992 when Adele Givens called him to the stage. He was a smashing success and has been a full-time comedian ever since. He has taken top honors at the Miller Genuine Draft Comedy Search, Budweiser Comedy Competition, Chicago Home Jam and Laffapalooza. Film and television credits include NBC’s “Last Comic Standing,” 20th Century Fox’s “Like Mike,” NBC’s “The Tonight Show,” BET’s “Comic View,” Fox’s “Mad TV,” Comedy Central’s “Premium Blend,” HBO’s “Def Comedy Jam,” “It’s Showtime at the Apollo,” Tyler Perry’s “House of Pain,” and plays recurring character Robert Tubbs on Fox’s “The Cleveland Show”! Corey has also been featured in three of his own Comedy specials, “Corey Holcomb: The Problem Is You”, “Comedy Central Presents: Corey Holcomb”, and “Corey Holcomb: Your Way Ain’t Working” recently featured on Showtime Network.

South Side Chicago native Deon Cole is one of comedy’s brightest stars. After Deon’s standup appearance on “The Tonight Show with Conan O’Brien,” he was offered a job as a staff writer for the show, and continued as a writer for “Conan” as well as made multiple appearances as a commentator and sketch performer on the show. He appeared on MTV’s “Short Circuitz” and “Wild N’ Out” with Nick Cannon, as well as “Barbershop 1 and 2”. He has been on “Comedy Central’s Laffapalooza”, HBO’s Def Comedy Jam, BET’s Comic View”, NBC’s “Showtime at the Apollo”, BBC’s “The World Stands Up”, and STARZ’ “Martin Lawrence’s First Amendment”. Deon also had his own half-hour special on Comedy Central which premiered in 2007 and currently has his own show “Deon Cole’s Black Box” on TBS.