The Whispers and Lenny Williams – The Power of Soul 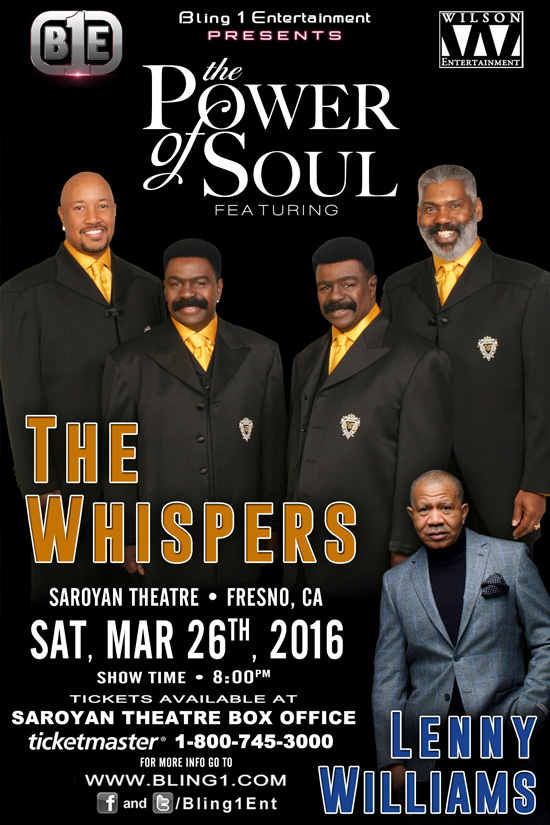 The Whispers and Lenny Williams – The Power of Soul (Events, Up Coming Events)

The Whispers are a veteran R&B quintet with an impressive 50-year legacy of R&B hits. Formed in Los Angeles by twins Walter and Wallace Scott, Nicholas Caldwell, Marcus Hutson, and Gordy Harmon (who left in 1973), The Whispers turned up on the Dore label in 1964 with “I Was Born When You Kissed Me.” In 1969, the quintet climbed the soul charts for the first time with “The Time Has Come” on Soul Clock, and they cracked the R&B Top Ten the next year with “Seems Like I Gotta Do Wrong.” They’ve remained hitmakers ever since for the labels Janus, Soul Train, and Solar, with smashes like the solid gold chart-topper “And the Beat Goes On” in 1980 and another number one urban contemporary hit, “Rock Steady,” in 1987. After being their backbone and selling point since the group’s inception, twin lead vocalists Walter and Wallace Scott took time out for solo careers in 1993, but remain with the Whispers.

Lenny Williams is an Legendary Soul/R&B singer known for his work in the R&B and soul music genres. During the 1970s, he was the lead vocalist for Tower of Power. As a soloist, he made several hit recordings, including Cause I Love You and Choosing You.